Environment experts say the government should tax pollution to fund social care and the NHS, instead of increasing national insurance.

Chris Sherrington, head of environmental policy and economics at the sustainability consultancy Eunomia, says the government has missed an opportunity to use environmental fiscal reform, where taxes or increased on the things we want less of, such as pollution, and lowered on things we want more of, such as jobs, to fund increased investment in health and social care.

He said: ‘In a country where we’re trying to recover economically from a pandemic and decarbonize our society why aren’t we taxing pollution instead of work?

‘I’m sure I’m not alone in thinking about the possible alternative ways in which an extra £12bn could be found for the NHS and social care.

‘Analysis from early 2020 by Simon Evans of Carbon Brief shows that had the fuel duty freeze not been put in place, not only would UK CO2 emissions be up to 5% lower, but the exchequer, according to the Institute For Fiscal Studies, would have gained £11.2bn in the financial year 2019-20, rising to £13.9bn in 2022-23 if the freeze continues.’ 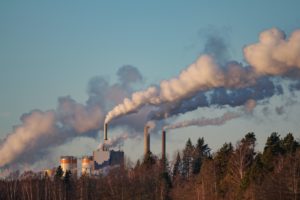 This comes after Boris Johnson announced National Insurance contributions will rise by 1.25% to pay for the social care system in England

The 1.25 percentage point increase is expected to raise about £12bn which, in the early years, will mainly be used to fund dealing with the NHS backlog.

Chris Sherrington said: ‘Environmental fiscal reform is a tried and tested way of raising revenue and there is a lot of research being carried out about how it can support decarbonisation.

‘In a research project we are working on for the European Commission on environmental taxation and budgetary reform, we have analysed the cost-effectiveness of various environmental taxes that could be used to address different environmental issues including air pollution, water quality, water stress and availability, waste, resources and circular economy, biodiversity and land-use change.

‘In the project, we have designed 54 market-based instruments targeting key environmental problems in the EU-27.

‘Another project in this area brings together 40 case studies of how environmental fiscal reform has been or is being used, including landfill tax and the aggregates levy (raw materials in relation the construction).

‘The principle is well-established. Some people think such an approach is regressive, but our research has shown that if designed correctly, switching the burden of taxation can support and encourage a socially-just society.’