Victory for staff involved in strikes or disputes

Employers will no longer be able to mistreat any employees who take part in union-organised workplace disputes.

UK law had previously prevented employers from sacking staff involved in strike action or other workplace disputes, but not from disciplining or making life difficult for them, says UNISON.

But now, disciplinary action against workers who go on strike will be unlawful. This follows a judgment at the employment appeal tribunal (EAT) over a case taken by care worker Fiona Mercer against the Alternative Futures Group (AFG).

She had been involved in organising, and subsequently took part in, a long-running dispute over AFG’s plans to cut payment for sleep-in shifts undertaken by its care staff.

Fiona was disciplined, suspended, and prevented from going into work by her employer. AFG’s heavy-handed tactics meant she and many of her care worker colleagues were put off from taking part in the strike action, says UNISON.

UNISON and Fiona had originally taken North-West based charity AFG to an employment tribunal in Manchester in May 2020.

There the union argued that Article 11 of the European Convention on Human Rights, incorporated into UK law in the 1998 Human Rights Act, protects workers involved in legal disputes against their employer. UNISON said this meant they should not be disciplined or treated unfairly in some other way, because they had taken part in industrial action.

However, the tribunal found that although the Trade Union Labour Relations (Consolidation) Act 1992 wasn’t compatible with international human rights law, it wouldn’t be taking further action.

UNISON appealed, and now today the EAT has found in Fiona’s favour. The EAT president said that UK law was not compliant with international law, and has added wording to the 1992 Act, so that striking workers are now protected. 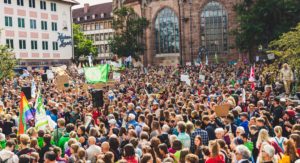 Commenting on the EAT decision, UNISON general secretary Christina McAnea said: ‘Good employers have nothing to fear from today’s judgment. But those who’ve been treating staff unfairly because they’ve taken strike action will need to beware.

‘Employees don’t actively seek to get involved in disputes at work. But staff are often left with little other option when employers behave badly.

‘Until now, employers have used a loophole in UK law to pick on workers who’ve taken part in disputes, safe in the knowledge that nothing will happen to them. Now they’ll no longer be able to.

‘This is an important victory for UK workers. It confirms that if ever they need to take legal action over pay, holidays or other workplace issues, unions can protect them from employer bullying and harassment.’