The sister of a man with autism calling for more to be done to stop people with learning disabilities and autism from being detained in mental health hospitals.

Beckii Davis, from north Yorkshire,  fears that her brother Elliot will continue to be detained in the hospitals known as assessment and treatment units (ATUs) where he has spent the last three years.

Elliot has been diagnosed with autism and epilepsy for which he takes medication. He had been living at home with his family as part of a community care package.

When his mental health declined he was admitted to a psychiatric intensive care unit, run by Tees, Esk and Wear Valleys NHS Trust in April 2018. Shortly afterwards he was transferred to another hospital, also run by the Trust.

Elliot’s family said he spent significant time in isolation during his stay in hospital.  The Trust recently said Elliot should be assessed to see if he should be under the care of forensic services.

However, Beckii said an independent review recommended steps should be taken to draw up a community care package for Elliot.

Beckii also fears that her brother could be moved into forensic services which would see him moved from the hospital, potentially to another part of the country where he could be housed alongside people convicted of a crime.

She believes that her brother’s physical and mental health is deteriorating so the family want Elliot to successfully transition into live in the community where he can thrive with the right support and spend more time with his family.

Beckii said: ‘When Elliot was admitted to hospital we hoped he would receive the help he needed and would be able to return home within a few weeks.

‘However, more than three years on he’s still detained in hospital. The change in his demeanour and behaviour over that time has been stark.

‘He has no quality of life and we believe staying in detention is going to make his condition worse.

‘All we want is for him to live in a home and his needs to be fully assessed and the most suitable care package given to him so he can make the most of life.’

Beckii is also calling for action to reduce the number of people in ATUs. This comes a decade on from the Winterbourne View scandal.

In 2011 undercover filming by BBC Panorama uncovered a pattern of serious abuse at Winterbourne View, a private hospital near Bristol that treated people with learning disabilities and autism.

Filming showed patients being dragged and slapped by staff. Following the programme, a number of workers were arrested and the home closed.

At the end of June 2011, a group of 86 organisations wrote to the government asking for the use of residential hospitals to end. The following month a Care Quality Commission report found there had been a systematic failure to protect residents at Winterbourne View.

In July 2011 it was also revealed that other employees working at the hospital had raised concerns to the authorities 19 times before the BBC filming took place.

A total of 11 former staff members pleaded guilty to criminal charges in relation to the abuse of residents.

In December 2012 the government said it was planning a ‘dramatic reduction’ in the number of people with learning disabilities who were kept in hospitals in England. More focus would be placed on community-based support, it added.

More than 2,000 people with learning disabilities were in the hospitals at the end of March, according to latest NHS Digital figures. Of those, 1,205 – 59% – had been in hospital for a total of more than two years.

The average cost to the taxpayer of keeping a person detained in a hospital is thought to be £3,563 per week or £185,276 per year. 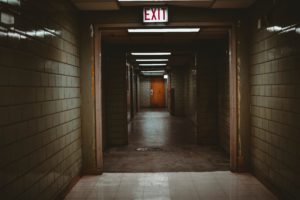 Beckii said: ‘It’s not just Elliot who finds himself in this position. Winterbourne View happened 10 years ago and it’s unbelievable that a decade on we’re still talking about issues around ATUs.

‘It’s about time more was done to fully resolve the issues around ATUs. Too many peoples’ lives are still dominated by these units.

‘It’s not just those who are detained who are affected but also their relatives who are left to try and pick up the pieces.

‘There is not enough community provision for people like Elliot and they are stuck in hospital when they are not ill.’

The family have now instructed lawyers at Irwin Mitchell to investigate the care Elliot is receiving in the mental health hospital.

Dan Scorer, head of policy and public affairs at the learning disability charity Mencap, is calling on the government to deliver the system-wide change they have promised.

‘It is appalling that 10 years after the Winterbourne View hospital abuse scandal, families, like Beckii’s, are still being forced to take legal action to get their loved ones out of these modern-day asylums.

‘We very much hope that this intervention from Irwin Mitchell will help get Elliot out of hospital and back home, close to his family, with the right support.

‘People with a learning disability and or autism have a right to live in their own homes, not be locked away in hospitals because they cannot get specialist support in their community.

‘The government must step up and deliver the system-wide change they have repeatedly promised before more people are abused and lives destroyed.’

Minister for care, Helen Whately said the NHS Long Term Plan commits to reducing inpatient numbers of adults and children with a learning disability and autistic people by 50% by 2023/24.

‘The abuse and neglect at Winterbourne View was intolerable and we are steadfast in our commitment to stamping out abusive practices and poor quality care, wherever this exists.

‘In the decade since this horrendous abuse was revealed the CQC has improved how they inspect these types of services and takes action against any that are failing to keep people safe.

‘Autistic people and those with learning disabilities deserve to be treated with dignity and respect and I am determined to see them receive safe and high-quality care.

‘We are investing in community services and committed to meeting the goals set out in the NHS Long Term Plan, including the commitment to reduce reliance on inpatient care for those with learning disabilities and autistic people.’

Ruth Hill, chief operating officer at Tees, Esk and Wear Valleys NHS Foundation Trust, said: ‘We have a duty of confidentiality to our patients and therefore it wouldn’t be appropriate for us to comment publicly about the care of an individual.

‘We are aware of the concerns raised and we will continue to engage with Elliot’s family and work with them to provide the best possible care.

‘As a trust, we provide community and inpatient services for adults with a learning disability across Durham and Darlington, Teesside, North Yorkshire and York and remain committed to providing the best possible care for individuals.

‘We work closely with families and carers, commissioners and local community teams and make every effort to support adults with a learning disability to live in the community with a bespoke package of care.’