Despite mental health and climate change worries, youth believe in their ability to improve the world, according to a new survey for World Children’s Day Finds.

Despite common worldviews of young people today as having a bleak attitude to life, with huge rates of anxiety over everything from mental health to climate change, a new UNICEF study has revealed that young people are more positive, thinking that each generation is improving upon itself.

The study was a landmark global study for UNICEF by Gallup for World Children’s Day, surveying two age groups in 21 countries – aged 15/21 and 40 plus.

The samples were from different socioeconomic groups, to compare attitudes.

The results suggested that the younger generation are more sceptical of what they read on social media, with only 17% of young people trusting social media ‘a lot’, however they are more positive and globally-minded than their elders and are more likely to be invested in the possibility of global cooperation and international institutions. 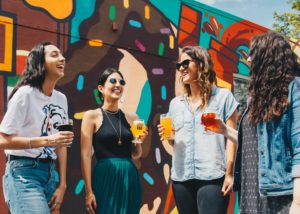 This globalisation was a key issue for the report, suggesting that young people are the product of the global world we now live in.

39% identified most with being part of the world, rather than their own nation or region, compared with 22% of the 40-plus group. With each additional year of age, people were on average about 1% less likely to identify as a global citizen.

The report goes on to conclude: ‘Born into a more digital, interconnected and diverse reality, young people see a world that is largely a better place for children than the one their parents grew up in – a safer and more abundant world that offers children better education, opportunities and hope for the future.’

The young people surveyed also believed that childhood had improved, as had healthcare, education, and physical safety – all of which they said was improved for them compared to their parents’ generation.

Pressure was another issue for young people, as 59% stated that children today faced more pressure to succeed than their parents did. Young people were also very aware of risk, especially online for children, with most young people seeing serious risks such as seeing violent or sexually explicit content or bullying online as an issue.

The UNICEF survey did find areas where both generations aligned. Climate change, the importance of education, global collaboration and children’s agency were some areas of multi-generational alignment, whilst optimism, global mindedness and recognition of historical progress reflected the deepest divides between the generations.