Call for removal of sugar in toddler snacks

Action On Sugar analysed 73 baby and toddler products available in the UK and found that some contain an unnecessary two teaspoons of sugar per serving.

Snacks such as puffs, rusks and biscuits are overloaded on sugar, according to Action On Sugar, a campaign group that hopes to inform and influence sugar reduction policies in the UK, especially stressing the fact some foods with high sugar content are branded as ‘weaning foods’.

Despite healthy sound claims on the packets, Action On Sugar reveals that popular snacks for babies and toddlers in the UK – often branded as healthy – have ‘alarming’ amounts of sugar in, with certain products being made from nearly 60% of free sugars.

The campaign group finds this particularly worrying as ‘babies and toddlers should not be eating any free sugars at all’. Instead, Action On Sugar argues, ‘children aged between the ages of one and a half to three are exceeding 27.9g (equivalent of 7 teaspoons) of free sugars per day, according to the National Diet and Nutrition Survey.’ 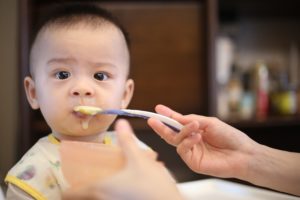 Heinz Farley Mini Rusks Original were one of the worst offenders found in the survey, with the equivalent of two teaspoons of sugar per serving, whilst Kiddylicious Banana Crispy Tiddlers contain more than 50% sugar.

Overall, 27 of the products tested would qualify for a high sugar label, whilst only six met a low label for sugar. 36 of the 73 products claimed – on the packet – that their snacks were suitable for babies under the age of 12 months, which Action On Sugar says is misleading as sugar-sweetened food and drink should be avoided in this age group.