Type two diabetes health checks down by 7.4m due to Covid restrictions

The research, published in BMJ Quality and Safety, was funded by the National Institute for Health Research Greater Manchester Patient Safety Translational Research Centre (NIHR GM PSTRC). The Centre is a partnership between The University of Manchester and The Northern Care Alliance NHS Foundation Trust.

The research involved analysing the primary care healthcare records of 618,161 people with type 2 diabetes to estimate how many health checks had been missed during the pandemic in 2020 and who had been most affected.

The checks include measuring blood pressure and weight, urine tests for protein and blood tests for cholesterol, kidney function and average sugar level. These processes are essential to minimise the risk of developing long-term complications caused by type two diabetes.

The results have shown older people with type two diabetes from deprived areas were most likely to miss out on having health checks.

This almost certainly means that large numbers of people are being left with poorly controlled diabetes and high blood pressure which increases the risk of developing serious complications such as heart attacks, strokes, kidney failure and amputations.

Dr Matthew Carr from the University of Manchester, and lead for this study at the GM PSTRC, said: ‘Health checks for people with type two diabetes are generally carried out in general practice and as face-to-face appointments aren’t yet back up to pre Covid levels delays are likely to continue. As a result, there’s an urgent need to reduce the harm caused by these changes to the way care has been delivered.

‘Although it’s not possible to estimate the number of people who have missed out on a check, we are able to analyse health care records to identify the number of processes that took place. This has allowed us to understand the size of the problem, along with the sectors of the population that have been most affected by looking at how trends varied by age, sex, ethnicity and deprivation.’ 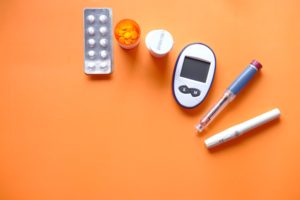 The research revealed that, between May and December 2020 the number of health checks did increase, but they remained between 28-47% lower than expected.

Nikki Joule, policy manager at Diabetes UK, said: ‘It’s incredibly concerning that both diabetes checks and prescriptions of new medicines for people living with type two diabetes were reduced during the pandemic.

‘Blood cholesterol, blood pressure and longer-term blood sugar levels are vital indicators of how type two diabetes is being managed, and missing these checks puts people at greater risk of diabetes-related complications such as heart attacks, strokes and kidney failure.

‘That older people from deprived backgrounds have been disproportionately affected is yet another stark example of how the pandemic has exacerbated health inequalities. It is vital that this is addressed, and the backlog of care urgently dealt with to avoid people developing life-changing complications of diabetes that may have been preventable.

‘While we welcome the recent government commitment to invest more in the prevention of type 2 diabetes, measures to help people already living with diabetes should be prioritised equally to allow more people the best chance to live well with the condition.’

To find out your risk of developing type two diabetes and steps you can take to reduce it, visit diabetes.org.uk/risk.