Music for Dementia has worked with the BBC Philharmonic to help Paul fulfil a lifelong dream of conducting a symphony orchestra – showing that people with dementia can continue to experience happy and fulfilling moments.

A year after Paul Harvey played his Four Notes composition on BBC Breakfast, Music for Dementia teamed up with the BBC Philharmonic to help him fulfil a longstanding dream of conducting a symphony orchestra.

It resulted in an emotional afternoon, with Paul conducting the BBC Philharmonic playing two of his compositions and also playing the piano with the orchestra.

Many will remember seeing 81-year-old Paul Harvey on BBC Breakfast after his son, Nick, videoed his spontaneous Four Notes composition, which went viral across social media in September 2020.

To celebrate the one-year anniversary of the viral video, The Utley Foundation’s campaign, Music for Dementia, asked the BBC Philharmonic if it could help Paul fulfil his ambition of conducting a symphonic orchestra and the answer was a resounding ‘yes’. 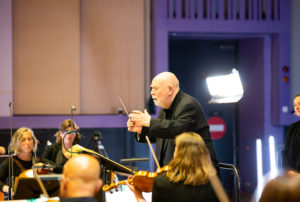 Campaign director at Music for Dementia, Grace Meadows, said: ‘We thought that Paul conducting the BBC Philharmonic and playing piano with the orchestra would be a fitting way to celebrate this one-year milestone in his journey and we’re really proud to be a part of it.

‘What was so fantastic about this was watching Paul being defined not by his condition, but by his musical talent. We could see from the joy on his face how much this means to him.

‘We hope it shows that many people with dementia can continue to follow their dreams, and experience happy and fulfilling moments.’

There are more than 850,000 people living with dementia in the UK and Music for Dementia is campaigning for music to be an integral part of dementia care. Ms Meadows said:

‘There is no cure for dementia, but there is something readily available and easily affordable that can help, and that thing is music. We want to see everyone living with dementia, whatever the setting, to have access to music as part of their daily care.

‘A simple ask, but our experience tells us that this is not always happening in practice. That is why, we are calling for people to add their voice to the campaign to show they believe in the power of music for people living with dementia.’

Add your voice to the campaign by signing up here.