There were an estimated 28,300 excess winter deaths in England and Wales in the winter of 2019-20, a 19% increase on the previous year. Social Care Today reporter Laura O’Neill investigates whether nationalising Britain’s heating and plumbing network could save lives.

James Anderson founded Disability and Elderly Plumbing and Heating Emergency Repair (DEPHER), in 2017 after an elderly, disabled man called him to check a quote he’d been given for a new boiler.

When James arrived, he found the man shivering in bed with no hot water in the taps. He explained that an engineer had been out and told him he needed a new boiler and quoted him £5000.

‘I knocked on the door, and the first thing that worried me was that he shouted for me to come in.

‘I realised he was bed-bound, so the front door was unlocked all the time.

‘I checked around the house and it looked like the radiators had been loosened to make them rattle.

‘There was no water coming out of any of his taps so after I checked for an air bubble in the system I checked the water tank. There was a gas engineer trade magazine shoved down the back, blocking the water.

‘I got on the phone to the company director who swore none of his engineers would do that. I said I was going to ring the magazine publisher and get them to tell me where that magazine had been delivered using the serial number.

‘He sent someone round to install a new boiler, free of charge, within the hour.’

Six weeks later, James founded DEPHER. The community plumbing and heating company provides free services during winter months, and a discounted rate during summer, on a range of emergency works including gas leaks and restoration of heating and running hot water.

The free initiative is available to the over 65s and customers who are registered disabled. It is also open to people who are vulnerable and unable to afford repairs to their heating or plumbing systems in an emergency.

James and his team have since helped more than 18,000 families across the country from Liverpool to London and even as far as New York.

He said he’s seen elderly and vulnerable people who can’t afford to have their heating and plumbing fixed suffering, and even dying, in cold homes. While others are being forced further into poverty in order to pay for repairs and maintenance.

James said: ‘These are all 80 and 90-year-olds who have given up and say they want it all to end.

‘They can’t stand to be miserable and cold in their own homes. They say they’d rather die and be with their loved ones.

‘The last one was in Preston she rang me and said she had no hot water and was stuck in on her own. I drove 52 miles to her house and knocked on the front door but there was no answer.

‘I went around the back and she was stood on a chair with a rope around her neck.’ 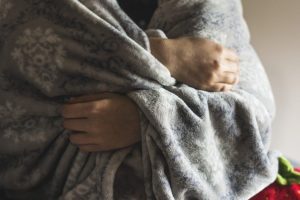 In 2019, there were an estimated 3.18m households in fuel poverty in England. A number that is set to soar when the Universal Credit uplift and energy price cap are slashed next month.

‘Everybody has the right to live in a warm and safe home but tragically, many people died needlessly last winter because of cold homes.

‘Living in a cold damp home can also lead to extremely poor health, especially in those who are vulnerable such as young children, older people, and those with long term sickness and disabilities.

‘With fuel bills set to rise again, without urgent local and national action we are worried the same will keep happening each winter”.

James is calling for Britain’s heating and plumbing network to be nationalised to stop providers from taking advantage of elderly and vulnerable people by charging them high repair and installation fees.

‘Some of the jobs we’ve been out on would make your eyelashes curl. People are living in absolutely horrendous conditions.

‘And so many of them are too ashamed to ask for help. They don’t want to be a burden on their friends and family so they keep it all behind closed doors because society has made them feel like they need to hide away.

‘These are hard people who have been through things you can’t imagine. And when we tell them we can fix it and they won’t have to pay they can’t believe it, they stand there with tears in their eyes.

‘And they are the ones that these companies see as a target.

‘They have no morals, and the government turning a blind eye to it and letting them do it.’

The Department for Business, Energy and Industrial Strategy has been contacted for comment.