A BMA survey of the medical profession has found antiquated attitudes prevail towards women and that they lack the support needed to establish themselves in leadership positions.

As with many forms of discrimination, the existence of sexism is largely undisputed, yet understanding its prevalence, how it manifests and what impact it might be having on the medical profession and health service can be far harder to quantify.

It was partly this fact, as well as her own experiences of sexism in the workplace, that led to one junior doctor, Liverpool-based ST1 emergency medicine Chelcie Jewitt, to speak out on the issue of gender-based discrimination and urge other doctors to come forward.

Dr Jewitt’s efforts to shed light on individual experiences and gain a greater sense of what might be happening on a wider scale, led to the BMA conducting a survey earlier this year.

The study, the results of which have been published this week, canvassed the views of more than 2,500 men and women, working in all parts of UK medicine, from various branches of practice and at different stages of their careers.

While they may only be scratching the surface, the results not only reveal how sexist attitudes and behaviour can be found across all parts of the health service and medical profession, but also the many different forms these can take.

When asked how frequently on average they had personally experienced sexism at work in the past two years, 31% of women doctors said they had experienced it on either a daily or weekly basis, with just nine per cent saying that they had received none.

The number of reporting witnessing sexism in their workplace during the same period was even greater, with 37%  saying they had observed such behaviour on a daily or weekly basis.

When pressed on the forms of sexism encountered, respondents to the survey were able to highlight the many guises these attitudes and behaviours could take.

Asked whether they believed they had been treated less favourably by either a senior colleague or patient due to their gender, 47% and 65% of women respectively felt that they had been, compared to just 10 and 8% of doctors who are men.

‘While I was operating, two male consultant anaesthetists were talking [and] one complained he had sore shoulders and neck,’ a woman junior doctor told the survey.

‘The other stopped me operating to ‘ask a very important question’ and asked me if I could give him a massage, adding, ‘I’m sure you’ve got good hands.’

Gender also appears to influence the way in which seniority and clinical experience are perceived both by patients and other doctors.

While 89% of men responding to the survey said that they felt they had not been assumed to be in a more junior position than the one they actually occupied due to their gender, only 15% of women said the same.

Similarly, 82% of men said that they did not feel their clinical ability had been doubted or undervalued because of their gender, compared to just 24% of women.

‘When reviewing a patient on another team’s ward, the male consultant from the other team approached the male senior house officer (SHO) and I, after we’d entered the ward,’ one woman consultant told the survey. 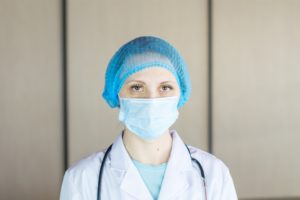 While there is an obvious and immediate impact to being on the receiving end of a sexist comment or interaction, the survey sought to determine whether gender discrimination might also have an impact on professional development and career paths.

When asked whether sexism acts as a barrier to career progression, 79% of women and 46% cent of men told the BMA that they believed it was to either a ‘great deal’ or ‘fair amount’.

By contrast, 22% of women responding to the survey felt their gender had had a significantly negative impact on their professional lives, while just three per cent of men felt the same.

‘I was given sexist feedback in an MSF from a unit that I had otherwise enjoyed. It has changed how I feel when working there now, and made me doubt my clinical practise,’ a woman doctor told the survey.

‘I no longer take locums and it has made me doubt my career in medicine. It is unfair that we have to work twice as hard to get half the recognition of men, and even then, there are still opportunities that we miss out on.’

The role of gender appears to also influence what areas of medicine women and men choose to specialise in.

Thirty-nine per cent of women and 11 per cent of men felt they had been discouraged from and chosen not to work in a particular medical specialty because of their gender.

Forty-one per cent of women cited surgery as the specialty they felt most discouraged from pursuing, while 53 per cent of men responding to the survey said this about obstetrics and gynaecology.

When it came to medical training, 44% of women told the survey they felt they had had fewer opportunities for development than their colleagues who were men, compared to just eight per cent of men when talking about women colleagues.

Meanwhile, 18% of women said that they had been actively discouraged from applying for senior roles in their workplace such as GP partnership or clinical director, compared to just three per cent of men.

‘I have seen a female colleague take on and then drop a leadership position,’ a male consultant told the survey.

‘She was not supported; the position was ill-defined and expectations not achievable. When she tried to resolve this, she was side-lined, so her position became untenable. She has since been overlooked for promotion whilst a male colleague has been supported over her.’

Evidence to act on

Responding to the study’s findings, Dr Jewitt said that while many of the figures and personal anecdotes submitted to the survey had been harrowing, many had sadly not come as much of a surprise to her.

‘Even for one person to have an issue in relation to their gender in the workplace is one too many, the fact that there are literally thousands of respondents to this survey is really powerful,’ she says.

‘Having proof that there is an issue is very motivating to making you want to change things, although it’s obviously frustrating that we still are having to challenge and change these views.

‘Through this survey we now have black and white figures, and I am positive that now this problem has started to be identified and defined, it will hopefully be the catalyst to bringing about change. I think that a lot of people, irrespective of their gender, know that this [sexism] is a problem.

Concerning what lessons can be learnt or actions taken as a result of the survey, Dr Jewitt said that she hoped that more doctors would be willing to speak out about their experiences of workplace sexism, adding that sharing such experiences would both further highlight the issue, and demonstrate that people were not alone.

She added that while she fully understood that for many doctors, particularly those at early stages in their careers, were often reticent at the prospect of speaking out, she believed there were a number of ways in which individuals could feel more empowered to take action.

This included building support networks among workplace colleagues, and that medical supervisors ensured that they made themselves open and approachable so that staff would have greater confidence in coming to them for support.

‘NHS organisations are working hard to make sure their staff do not experience sexism, or indeed, any form of discrimination, and Amanda Pritchard’s recent appointment signals a more representative leadership. But as this report makes clear, there is far more work to be done.’