UK Music and Music for Dementia have joined forces on a ground-breaking project to show how music can play a more vital role in improving health and wellbeing.

As part of the project, the collective voice for the music industry and the campaign have launched a nationwide ‘Power of Music’ survey.

The survey, which is open to everyone – organisations and individuals – will contribute findings to further discussions with the government about the right policy interventions needed to enhance music’s role in health and wellbeing.

Questions include the role for music in improving care for those living with psychological and physical conditions, barriers that might prevent greater partnership, and what more could be done to support the use of music in health and wellbeing in care.

UK Music and Music for Dementia are keen to get as many responses as possible from both individuals and organisations before the survey closes on June 30.

The decision to undertake the survey followed a top-level meeting in April when UK Music and Music for Dementia brought together government ministers, music industry and healthcare leaders, charities and other stakeholders to discuss the benefits to health and wellbeing that music can bring.

In recent years there has been increasing evidence to show the power that music can have in supporting those with a variety of conditions including dementia, depression, autism and those in need of end-of-life support. 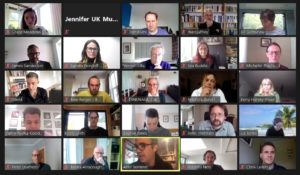 According to the BPI’s All About The Music 2021, 94% said music helped lift their mood during lockdown and 73% said that they felt more able to manage their anxiety levels thanks to listening to music during the pandemic.

A study in 2017 by the American Journal of Hospice and Palliative Medicine revealed 96% of patients in a controlled study had positive responses to music therapy.

Vocal and emotional interventions were two of the most effective means of improving symptoms which included pain, anxiety, depression, shortness of breath and mood.

UK Music chief executive, Jamie Njoku Goodwin, said: ‘Music has an incredible potential to improve lives in all sorts of ways – and this is especially true when it comes to health and wellbeing.

‘I’m determined to seize these opportunities and make sure we capitalise on the astonishing power of music to improve health and wellbeing. I’ve been blown away by the huge appetite across the music industry, the health and care sector, and Government to do more in this area.”

‘The Power of Music project that we have launched with Music for Dementia will enable us to gather views from across the sector, develop clear recommendations for what needs to be done, and bring about the positive changes we all want to see.’

Music for Dementia campaign director, Grace Meadows said: ‘The transformative power of music is unquestionable and never before have we seen that come to the fore as we have over this past year, particularly for people living with dementia.

‘We have an opportunity now, provided by government, to think and act together from across sectors, about what we can do together to make music more central in our lives to support our health and wellbeing.

‘I would urge everyone to contribute to this consultation and provide vital insights into the most effective and innovative ways we can do this, together.’