New grant funding has been launched to empower young people to spot abusive patterns in relationships.

The Your Best Friend project, which is funded by the Tampon Tax is aimed at resetting expectations of girls, young women, and non-binary young people so that they reject abusive relationships.

Youth organisations and charities across the country are being given the opportunity to gain grants of up to £25,000 to develop resources to support young people in toxic relationships.

Your Best Friend research finds 71% of young people have been aware of behaviours that worry them in friends’ relationships and 9 in 10 of these have actively spoken to their friends to try to help, showing that friendship circles and support networks are key in navigating abusive and toxic relationships for young people.

Though 54% of young people said they would definitely seek professional support if a friend’s mental health was suffering, this lowered to around 20% seeking support when they see their friend being controlled, shouted at, isolated or put down. 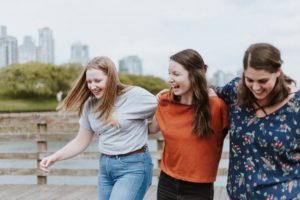 The campaign will aim to reach young people where they already are, providing support to open their eyes to what’s unhealthy and how to support one another.

£300k worth of grants are available for grassroots and youth organisations across England and Wales to adopt campaign material for local use or to come up with inventive ideas of their own.

‘We want to award these grants far and wide so that whatever a young person’s background, and wherever they turn – their community group, school, sports team, as well as online on social media, they can see the information they need to say ‘that’s not right’ and be able to help their friend, knowing when and where to get professional help.’

Laura, a young person involved in the project, said: ‘It is important that groups across the country, led by young people, are able to use onward grants to keep spreading the messages from Your Best Friend… [the money could be used] to keep resources updated and contextually relevant to their locality which could increase outreach and ensure as many people as possible are able to access the resources.

‘This could ensure more people have access to support if they or a friend experience a toxic relationship.’