NHS Providers and The Association of Directors of Adult Social Services say that an immediate bonus of up to £1,000 would help to stop staff from quitting before winter.

This advice comes alongside new figures which show that 87% of board-level executives from NHS Providers were ‘extremely concerned’ about the effect of the colder months on hard-pressed services. This has risen from 56% when the same question was posed last year.

About 84% were also worried that their trusts would lack the capacity to meet demand, with around the same proportion feeling that too little had been invested in social care in their area. More than nine out of ten were concerned about staff burnout and welfare – showing the deep effect the pandemic has had on health care staff. 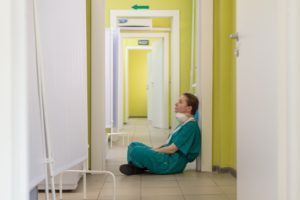 The survey, which was published on the eve of NHS Providers annual conference, suggests that this retention bonus for social care staff will halt those who may be leaving to work for delivery firms such as Amazon, or in hospitality, in the run-up to Christmas, according to health leaders.

NHS Providers also highlighted the high levels of bed occupancy for this time of year in many hospital and ambulance services, despite not being in the peak winter demand season yet, as well as many ambulance services already being on the highest level of alert.

This comes alongside recent news that the former health secretary Jeremy Hunt will on Tuesday try to force the current holder of the office, Sajid Javid, to publish an independent projection every two years. This will include how many staff the NHS needs and updates on progress towards delivering those numbers.

Hunt, who chairs the Commons health select committee, commented on the decision: ‘With shortages in every single medical speciality and lots of additional money going into the NHS it makes no sense to ignore the elephant in the room, which is that there are not nearly enough doctors or nurses to do the work the government and the public wants.’