Views are being sought on the Scottish government’s draft plans to prevent food insecurity, supported by food bank operators including the Trussell Trust and Independent Food Aid Network.

The proposals aim to end the need for food banks as a primary response to food insecurity, following action during the pandemic to prevent food insecurity through strengthening household incomes and delivering cash-first responses to financial hardship.

The Scottish government’s approach is weighted toward prevention, ensuring that everyone has enough income to afford food that meets their needs and preferences, with emergency and crisis responses delivered through joined-up local solutions such as emergency financial assistance and money advice, with help to access food provided in a way that aims to maximise dignity and reduce future need. 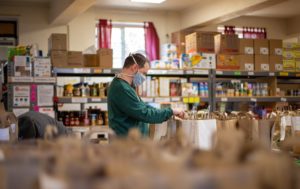 Social justice secretary, Shona Robison, said: ‘We share the same vision as food bank operators – they are not a long-term solution to poverty. Our draft plan sets out what we will do within our powers – including introducing a shopping voucher pilot scheme – to make food banks the last port of call. Over the last year we have invested around £2.5 billion to support low-income households, including nearly £1 billion to directly support children.

‘Despite our fixed budget and limited powers, we are taking action to support those in poverty, including discussions around establishing a minimum income guarantee for Scotland. As part of the right to an adequate standard of living, people need to be able to access food that meets their dietary, social and cultural needs and this plan shows the way forward.’

Sabine Goodwin, co-ordinator of the Independent Food Aid Network, which represents more than 500 food banks across the UK, added: ‘As the cut to Universal Credit and cost of living increases exacerbate poverty in Scotland, the publication of the draft national plan to end the need for food banks couldn’t be more timely. With a cash first, collaborative approach to food insecurity as the cornerstone of this plan, a time when food banks will no longer be needed to plug the gaps left by financial hardship is within sight.’

In related news, disabled people in Bristol are being encouraged to get involved with the new Disability Equality Commission, which will join the Commission on Race Equality and Women’s Commission in tackling inequality in the city.