Major A&Es treated more than 1.39m people during September, the highest ever for the month and all while staff cared for thousands of Covid-19 patients.

Figures published by NHS England showed that staff carried out 1.1m elective procedures in August, up by one third compared to the same period last year.

This was despite the health service admitting 23,000 Covid-19 patients in August, 14 times as many patients compared to the same month last year.

NHS figures also show a reduction in the number of patients waiting for a diagnostic scan for the first time this year, meaning more people are now getting the checks they need. This follows the rollout of NHS diagnostic centres last month which were backed by fresh funding to help the NHS to tackle the backlog.

Ambulances responded to a record 76,000 life-threatening call-outs, an increase of more than 20,000 on the previous high for September, while 999 took nearly one million calls in September.

NHS 111 also saw record demand taking a call every 7 seconds and over 1.9m calls in total across August. The NHS has invested an additional £23m into NHS 111 to help the service meet the increased demand.

The NHS has also announced that GP surgeries will be provided with emergency funding to provide more face-to-face appointments as part of a drive to tackle abuse against staff.

Professor Stephen Powis, NHS national medical director said: ‘There is no doubt the NHS is running hot, with the highest ever number of patients seen in A&E in September, 14-times as many covid patients in hospital compared to the same month last year and record 999 ambulance calls.

‘But despite the busiest September on record, NHS staff have moved heaven and earth to make the best possible use of additional investment delivering millions more tests, checks, treatments and operations.

‘That is why it is really important people do not delay seeking help from the NHS if they feel unwell.

‘Anyone needing help should come forward through 111 online so that staff can help you with the best option for your care, and it remains as important as ever to get your lifesaving covid jab, and with winter approaching, to get your flu jab too.’ 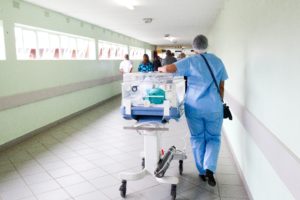 The NHS has started the coronavirus booster campaign with over 2.5 million top up jabs already done and the largest ever flu campaign is also underway with tens of millions eligible for the flu jab free this winter.

To protect themselves and the NHS this winter, people should get their booster jab when invited to do so and can contact their local pharmacy or GP to book in the flu jab now.

Around 1.25 million texts and 300,000 emails have already been sent to parents of two and three-year-olds urging them to book an appointment for their children, with a further 1.3 million letters landing in homes this weekend.

People seeking medical advice can use NHS 111 Online as their first port of call. The site can advise people on self-care, where to go for help based on their symptoms, and help with prescriptions.

In an emergency people should always dial 999 for immediate medical support.

In all, hospitals in England have now treated more than 450,000 patients with coronavirus.