Two graduates, Emily Hill and Cicely Baron, established and now run the PR and communications for local charity Harbour Housing and were recognised by the judges for helping to challenge misconceptions and elevate marginalised voices.

The Charity Times Awards celebrates best practice in the UK not-for-profit sector and the ceremony held at Grosvenor Square last week marked the 22nd year of the prestigious event.

The awards aim to promote and raise the profile of the charity sector as well as supporting professional development and raising the standards of charity management.

The PR Team of the Year award sought to celebrate excellence in the sector and recognise PR teams that were making a difference and raising awareness for their cause.

Also shortlisted in this category were Battersea Dogs and Cats Home, the RAF Benevolent Fund, the HIV Commission, Barley Communications and Hubbub, Royal College of Psychiatrists, and Syria Relief.

Harbour Housing is a homelessness charity based in Cornwall that supports people to develop their independence through safe homes and life support.

The pair has worked to demystify the charity’s operations, whilst bringing recognition to the work being done by its staff team and beneficiaries.

In the judges’ comments, they praised Harbour’s PR team for: “tackling negative misconceptions and taking back the narrative whilst securing much greater support and understanding in the community. 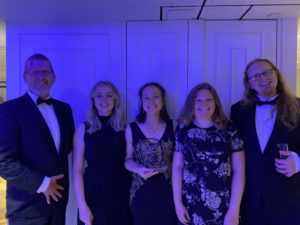 Emily Hill, the PR and communications lead for the charity, said: It’s a privilege to be able to promote the incredible achievements of all within Harbour Housing, from the staff team, to the trustees, volunteers, and the beneficiaries themselves.

‘There are so many positive stories of recovery and innovation to tell, and we’re so grateful to have been recognised for our work at such a prestigious event.

‘To have been considered for the award alongside so many amazing organisations is an honour in itself, and we’re glad to be bringing back this win for Cornwall.’

Malcolm Putko, operations director for Harbour Housing, said: ‘This young team has built up our PR department from scratch and their positivity and enthusiasm are relentless.

‘They have a real passion for the people we support and have done so much to raise awareness for these issues, tackling the stigma around stories of addiction and homelessness.

‘Their desire to use a person-centred approach in their work mirrors the ethos of the charity in all the support services we deliver. They’ve helped us to build our confidence in the sector and really boost staff morale by shining a light on their hard work, especially during the pandemic.

‘As a local Cornish charity, we are now recognised nationwide for our innovative work and have become a leader in the provision of specialist homelessness services. I’m so proud of the team for their success at the Charity Times Awards.’