Cleaners, porters, catering assistants, security guards and other health staff employed by private companies but working in the NHS must not miss out on any pay rise given to their colleagues, says UNISON.

UNISON is urging firms such as Serco, Sodexo and Mitie – as well as subsidiary companies owned by individual NHS trusts – to increase hourly pay rates to at least match new NHS rates (known as Agenda for Change) so they are not left behind.

Last week UNISON was critical of the government for failing to honour its own ‘levelling-up’ promises with the disappointing 3% pay rise for NHS staff in England. But as things stand, those working in the NHS and employed by private contractors are at risk of getting nothing, says UNISON.

UNISON has written to the largest private employers in the health service saying these staff “have worked hard and under incredibly challenging circumstances across the NHS throughout the pandemic”.

The letter says those working alongside directly employed NHS colleagues have no clarity about what is now going to happen to their pay.

It asks contractors ‘to ensure that pay rates of staff delivering services to the NHS are no lower than Agenda for Change across all the contracts they deliver within the NHS’.

The union is calling on all private companies running health contracts to match any pay rises awarded to those directly employed by the NHS. 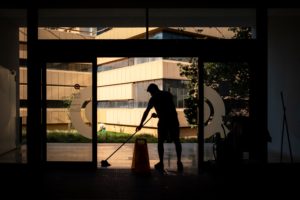 UNISON general secretary Christina McAnea said: ‘Thousands of cleaners, porters and caterers have worked tirelessly throughout the pandemic, alongside their NHS colleagues.

‘NHS staff have the benefit of a national pay system but those not directly employed are missing out, often because of complex contracting arrangements, penny-pinching practices and the hard-nosed pursuit of profit.

’Staff in the NHS work on one site as one team, from maintaining clean and safe wards to ensuring patients are fed and cared for. No one delivering NHS services should be paid less than their directly employed colleagues.

’A pay rise should apply to all NHS staff. Health workers employed by contractors must not be left behind. The public will expect everyone in the NHS to get the pay rise they’ve all more than earned.’

A Sodexo spokesperson said: ‘A large number of our colleagues working on NHS Trust contracts are already on Agenda for Change (AFC) terms and conditions which include pay rates.

‘We support the trade unions position of lobbying the government for central funding for new pay rates for NHS employees in England to be extended to include those working for private contractors such as Sodexo.

Serco and Mitie have also been contacted for comment.