A Bracknell care home resident was presented with a special print to honour his status as the last surviving pilot of 41 Squadron from WW2.

Born in Harpenden in 1922, Peter joined the RAF during the Second World War, in June 1941, at the age of eighteen. Taking to the skies, Peter became qualified to fly from September 1941, which meant opportunities to travel to a host of countries around the world, including Canada in 1942 and Belgium in 1944.

During the Second World War, the 41 Squadron operated the Supermarine Spitfire which was a key defender in the Battle of Britain and the fighting at Dunkirk. From 1943 to 1944, the Squadron flew many missions, including flying defensive patrols against low-level attacks and escorting essential weaponry to troops on the ground.

Peter, who turns 99 on July 28, said: ‘I am delighted with this early birthday present and all of the signatures from those currently serving.

‘I have had a very interesting life, and someone has definitely kept a very good eye on me!’ 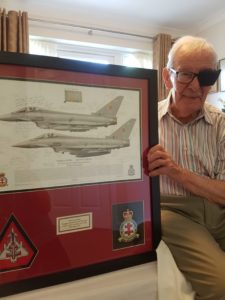 Erika Smith, home manager at Bickerton House, said: ‘Peter is a much-loved resident here at Bickerton House. Peter’s gentlemanly nature and his history in the RAF have always made him a hero, and now he has the plaque to prove it.

‘We were delighted to receive the call from RAF Coningsby and welcomed serving members of the Squadron to meet with Peter and honour his courage during the War.

‘Here at Bickerton House, we strive to celebrate the great achievements and rich history residents have and recognise the importance of revisiting and honouring those moments of the past that are reflected on with pride.

‘We look forward to celebrating Peter’s birthday soon and hearing more about his time spent in the RAF.’

Bickerton House has been designed to encourage residents to live active and fulfilling lives while remaining as independent as possible in a safe environment.