The NHS has been awarded the George Cross by The Queen.

The award comes in recognition of 73 years of dedicated service, including for the courageous efforts of healthcare workers across the country battling the Covid-19 pandemic.

The George Cross, the highest civilian gallantry award, equivalent to the Victoria Cross, has only been bestowed collectively twice before, and today marks the second time it has been awarded collectively by Queen Elizabeth II.

Prime minister Boris Johnson said: ‘We wouldn’t be where we are today without our health services. NHS staff have cared for us and our friends and family on the frontline of a pandemic for over a year, and I have witnessed their courage first-hand.

‘Thanks to their devotion and duty our NHS has saved countless lives, and the George Cross is a symbol of the nation’s gratitude. I know the whole of the UK is behind me in paying tribute and giving thanks for everything the NHS has done for us not only in the last year, but since its inception.’

The George Cross was first bestowed collectively to the people of Malta on 15 April 1942 by King George VI and was granted to the Royal Ulster Constabulary (the forerunner of the Police Service of Northern Ireland) on 23 November 1999.

It is given for acts of the greatest heroism or of the most conspicuous courage in circumstances of extreme danger. The George Cross was instituted in 1940. 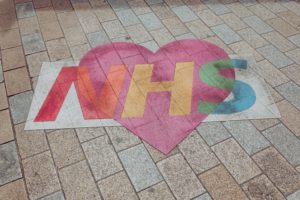 NHS chief executive Sir Simon Stevens said: ‘This unprecedented award rightly recognises the skill and compassion and the fortitude of staff right across the National Health Service, the nurses, the paramedics, the doctors, the cleaners, the therapists, the entire team, who under the most demanding of circumstances have responded to the worst pandemic in a century and the greatest challenge this country has faced since the Second World War.

‘Out of those dark times have come the best of what it means to be a carer and a health professional.

‘And so, as we congratulate staff across the health service on this award, we recognise that completing the NHS COVID vaccination programme which is in the final stages is now the surest way out of this pandemic and provides a sense of hope.’