David Crisp, a National Autistic Society-trained independent international autism speaker from Wired4autism, explains why an alarming number of parents are falsely accused of fabricating their children’s autism. And the devastating impact this has on both the parents and the children.

‘We don’t see that behaviour in school.’ These words will be all too familiar to parents of autistic children, like me, who are falsely accused of Fabricated or Induced Illness (FII).

Approximately one in five mothers of autistic children have been accused of FII and investigated by social services, while one in six has had their children placed in foster care or adoption. Yet FII, despite what the medical profession say, is not a diagnosis- it is merely profiling.

I am a late-diagnosed autistic and father of two children with autism. In 2005, our family was investigated by a social worker who concluded that ‘the parents must be commended for seeking a medical diagnosis for their children.’

More than a year later, after we sought autism assessments for our children, they were placed on the Child Protection Register.

Despite all of the evidence presented, some from the same professionals at the CP Conference, our children remained on the CP Register for more than a year. Even after an independent psychologist, chosen by the CP Conference chair, concluded that there were no concerns in our psychological profiles and that we were consistently acting in our children’s best interests.

When our children were finally removed from the CP Register, it was recommended that I undertake an autism assessment. Seven months later I was diagnosed as being on the autism spectrum. A year later, my son was also diagnosed.

It took a further seven years of misdiagnosis, with everything similar to, but not, autism for my daughter to be finally diagnosed, because the words ‘child protection’ remained on her records years after removal from the CP Register.

Sadly, my story is not unique.

In 2004, Lord Filkin, former education minister in Tony Blair’s Labour government, pledged to urgently investigate the increasing numbers of parents of Asperger Syndrome children that were being regarded with suspicion when their child either showed behavioural problems at school or, conversely, appeared calm at school, but had ‘meltdowns’ in the home.

This was a staggering 17 years ago and yet these cases continue to rise. For many parents, fighting for an autism diagnosis for their children puts them at risk of having the children placed on the Child Protection Register. And for those children fortunate enough to have received a diagnosis, social services may use the diagnosis as a stick with which to beat the parents.

Former director of social services John Coughlan wrote in 2004: ‘Just because a child has Asperger Syndrome, it doesn’t mean that there isn’t a problem with parenting.

‘Children who suffer from disabilities are at potentially greater risk of abuse.’ 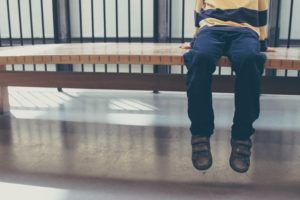 So, on the one hand, we parents are actively prevented from seeking a diagnosis, and on the other hand, when a diagnosis is finally received the parents face an even greater risk of being falsely accused of abuse.

A recent article in Autism Eye Magazine highlighted that increasing numbers of parents are being accused of exaggerating their autistic problems after requesting more support for their children. Campaigners such as Zoe Thompson argue that FII accusations are being used to ‘bully, coerce, victimise and control families.’

I was provided with some case studies by other parents of autistic children, as research for this article. Many spoke of the fight for assessment and diagnosis. While a worrying number of parents shared how easily these diagnoses were refuted by determined social workers.

One lady said: ‘My daughter and I are both diagnosed autistic. However, I was still accused of FII.

‘A social worker decided that my daughter was not autistic and social services threatened to take her away immediately.

‘As a consequence, my husband and I ended up on antidepressant medication and I had my first panic attack as an adult. Fortunately, the safeguarding team recommended no placement on the Child Protection Register.’

Another case involved a mother who was reported to social services by her child’s school who alleged that the mum may be drugging or abusing the child.

The parents faced court five times but were able to keep their children. However, the couple ended up separating due to the stress of the situation.

Allegations continued from the school even after children had stopped attending. The eldest child was later diagnosed with the very conditions the mum had suspected.

Throughout the ordeal, none of the court-ordered assessments was ever conducted. In the world of FII, parents are presumed guilty and must prove their innocence.

Even when they do, no apologies are ever offered for the distress caused to both the parents and the children, and their names remain flagged up on medical records for many years after.

In our case, 15 years later, it is still there in bold type on our daughter’s GP records. And because of perceived repercussions, we parents are rightly frightened to speak out against this injustice as the medical professionals, educators and social services appear to hold all the cards in a loaded deck.

This must not stop us from fighting for parental rights and our children’s rights to proper medical and social care. We owe it to ourselves, our children and future generations of parents and children.

Currently, professional campaigners in clinical psychology and social worker training are working on improving the guidelines for social services and the NHS.

Sadly, a few parents do fabricate or induce illness around their children, but this is statistically very rare. In a misguided attempt to prevent genuine abuse and neglect, ethical care has been lost, causing untold suffering to parents and children.

If you, or anyone you know, has been affected by these issues, please contact Sunshine Support or Fight Back.

This is a terrible situation David,thank you for sharing. Is there a “provide help “list for those waiting for diagnosis. great to see your work!

Hi Paul . Thank you for your kind words and responding to my article. Apologies for the late reply, but I am currently gathering research and networking to campaign and spread more awareness of Institutionalised parent carer blame and false accusations of FII. I have also just registered my business as a Community Interest Company. If you seek further information, please feel free to contact me via Linkedin or my company website. https://wired4autism.co.uk

I’m so sorry that you had to go thru this.
Great first blog as well!

Thanks for sharing and good luck on your mission for justice. Very sad and concerning when what is needed is support.
My daughter was a victim of severe and vile domestic violence – excellent devoted mother. Her two children were put of child protection register and the violent partner got away with everthing and to this day is still haressing her – setting up fake accounts on facebook to stalk her.
It makes me feel ashamed at times to say I am a social worker.

Hi Wendy. Presumably you are aware of the new mandatory training for social workers on autism and learning disabilities Oliver McGowan Training (more in my next article)?