An MP received a torrent of abuse after revealing that she is struggling with Post Traumatic Stress Disorder (PTSD).

Nadia Whittome, Labour MP for Nottingham East, said her doctor had advised her to take a step back from her work for the sake of her health.

Colleagues, including Labour leader Keir Starmer, quickly rallied around the 24-year-old, praising her bravery and honesty.

However, some people took to Twitter to hurl abuse at the MP, saying that PTSD was something only soldiers experienced and that she was ‘abusing’ the term for sympathy because she did not disclose the cause of her trauma.

Mental health campaigners, including PTSD UK founder Jacqui Suttie, said the response is indicative of the public’s misinformed attitude towards the condition.

PTSD develops in those who are involved in, or witness, a serious trauma; such as a life-threatening assault. During the trauma they feel intense fear, helplessness or horror.

Jacqui said people wrongly assume it is something only experienced by military personnel or that the sufferer is just dwelling on past events and needs to get over it or move on.

But having PTSD isn’t a choice or a sign of weakness, and it’s important that sufferers know that they are not alone.

Jacqui said: ‘When public figures bravely speak up about their experiences with mental health it can really help educate and inform people on how conditions such as PTSD can be caused, the symptoms they may experience and the treatments that are available.

‘Unfortunately, as in the case of Nadia, it does also open them up to criticism and accusations from people who think they know better than medical professionals.

‘Post Traumatic Stress Disorder can affect anyone who has been exposed to a traumatic event, this can include the trauma happening to you, or being a witness to trauma.

‘The defining characteristic of a traumatic event is its capacity to provoke fear, helplessness, or horror in response to the threat of injury or death and therefore can affect anyone, regardless of sex, race, occupation or gender.

‘Examples of traumatic events include serious accidents such as road traffic accidents, being told you have a life-threatening illness, bereavement, violent personal assault, such as a physical attack, robbery, or mugging, and childhood abuse and domestic abuse.’ 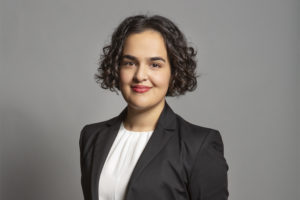 According to the mental health charity Mind, four in 100 people may be diagnosed with PTSD in any given week in England.

Jacqui developed the condition after she was assaulted. She said the attack left her stuck in the fight/flight/freeze adrenaline surge with debilitating, exhausting, uncontrollable and crippling fear.

She said she was afraid of everything and unable to do almost anything without incredible effort, even though the man who assaulted her was in prison.

‘At times I’ve been unable to move, breathe or speak from ridiculous fear just by going about my everyday life.

‘I developed psoriasis under my eyes from crying so much, doctors wanted to put me on beta-blockers so I didn’t damage my heart from putting it under too much stress.

‘I didn’t sleep for more than an hour at a time, my muscles and joints were in agony from being tense, I’d chip my fillings out from clenching my teeth so hard without knowing and I’ve made life difficult for everyone around me.

‘I wasn’t me anymore, I became a highly sensitive, faulty CCTV system.

‘I couldn’t go out alone, but I couldn’t be alone in the house either. Being off work for four months was therefore helpful, painful and awful at the same time.’

Help for Jacqui came in the form of Eye Movement Desensitisation and Reprocessing (EMDR), a NICE-recommended treatment that can reduce PTSD symptoms, such as being easily startled.

She can now be in an unlocked car alone, have a bath in an empty house and even drive with the windows down. She was also able to return to work.

But she was only able to receive privately due to long NHS waiting lists.

Currently, only one in eight adults with a mental health problem are getting any kind of treatment.